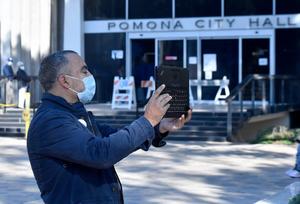 For the past few years, Paul Knopf has traveled with his middle school students to city landmarks throughout Pomona to teach them about local history and government. Though the coronavirus pandemic is keeping Knopf and his students out the classroom this semester, the John Marshall Middle School teacher was undeterred from teaching his annual lesson.

Standing outside Pomona City Hall holding a laptop in the air on a recent school day, Knopf conducted a live civics lesson to his eighth grade class of 20 through Google Hangouts. The lesson was on the city of Pomona.

“Does anyone know where I am this morning?” Knopf asked. “This is City Hall and I want you to understand the importance of knowing your local leaders and how local government works.”

Students followed along virtually as he touched on the origins of the city, local government and how they could get more involved. These types of interactive lessons never get old for Knopf, who has been with Pomona Unified School District for the past 24 years. Past field trips have included institutions such as the Claremont Colleges, Cal Poly Pomona and Ganesha Park, all of which were chosen to give his students more civic pride, Knopf said.

“I feel a lot of students in Pomona have a very negative perception of their community,” he said. “I’m trying to change that and let them know that all of this is in their own backyards.”

Eva Robles, Marshall Middle School principal, said Knopf’s creativity is a testament to his commitment to putting students first. She said the pandemic has allowed for teachers to “think outside the box” and reinvent the classroom.

“Any time you can engage students and allow them to be critical thinkers, it’s a recipe for success and Mr. Knopf is taking it to another level,” Robles said. “During this period, our teachers have gotten creative and are trying everything under the sun.”

Another testament to Knopf’s “outside the box” teaching style is the fact that students from over 20 years ago still contact him. His former students thank him for the field trips and lessons about Pomona they received in his classrooms, he said.

“Many will forget what you put on a test as far as dates but they’ll never forget their experiences that are hands on, it stays with you forever,” he added.

Backing up his point, student Nancy Cervantes-Saldana messaged Knopf as class wrapped up.

“I think it’s cool that you went because I can see what you’re talking about and I can understand more and learn about the history of Pomona,” she wrote.

As the lesson came to an end, Knopf waved goodbye to his students before signing off and shutting the laptop. Next week’s class will be on the American Revolution, he said.